A brilliantly painted pastel sky greets you each day in Baja.  The ambience is laid-back and easy-going. A few days exploring this desert paradise will transform anyone’s winter blues into sunny smiles!  Take some time to relax on the many sandy beaches and get your boots dusty as you rock hop along dry river beds to hidden waterfalls and palm oases! Venture south along the entire Baja peninsula to really immerse yourself in this special place!

Welcome to the Green Tortoise!

Get to know your fellow travelers as we depart the City by the Bay and head on down to southern California!  This evening’s destination is a boulder-strewn desert decorated with whimsical trees in Joshua Tree National Park.  We’ll share our first meal together and camp beneath a blanket of stars.

Then, we’ll cruise along the Salton Sea, one of the lowest spots on Earth and one of the largest inland seas!  Let’s go to the border of Mexico!

Our overland adventure continues in Northern Baja on the way to Playas de San Felipe.  As the Sea of Cortez gradually reveals itself, you’ll be mesmerized by its allure.  In the town of San Felipe, sample some tacos, relax on the beach and enjoy the coastal atmosphere and fresh sea breeze.  Don’t miss your first chance to watch the sun set in Baja!

Venturing south, we’ll journey towards Bahia de Los Angeles, commonly known in English as Bay of LA.  Wander around the natural and cultural museum for a deeper dive into the area’s treasure trove.  Then, head to a beachside restaurant to indulge in some fresh fish tacos and a margarita with a view!  From hiking to boat adventures to beach combing, you won’t be bored with the opportunities around this picturesque bay.

In Central Baja, we visit San Ignacio, an oasis of palm trees and tranquility lying in contrast to its surrounding parched desert landscape.  Stroll the small plaza, visit the tiendas on a souvenir hunt and marvel at the 17th century architecture of the Misión San Ignacio Kadakaamán.

The incredible coastline guides us along Bahia Concepcion and through quaint pueblos until delivering us to Loreto.  Take a walk along the seaside malecon or challenge yourself on a canyon hike!  Admire the Sierra de la Giganta mountains on a horseback riding tour or explore the islands of the Loreto Bay National Marine Park on an adventure guided by locals.

Journey to one of the oldest preserved Missions in Mexico, San Javier. Enjoy an authentic experience at a local goat ranch and sample fresh tortillas!

We’ll reach the southern tip of Baja at Cabo Pulmo! The chance to peek into the undersea world on a snorkeling or diving adventure on the best preserved coral reef in the Sea of Cortez will ignite your curiosity!  Maybe it’s a long walk on the beach that you’re craving.  From Pulmos Point to Los Frailes, this unspoiled land and seascape is one of the most cherished places on the East Cape.

Venture to a hidden waterfall and soak in rejuvenating springs before the final destination of Los Cabos!  Say adios or hasta luego to your new friends.  Maybe end your adventure with a trip out to Cabo San Lucas for some time at Land’s End or Lover’s Beach.

*Available for rent upon booking!

You’ll be traveling in a custom sleeper coach!

A sleeping bag is required for this adventure.  If you don’t have one, rent one from us upon booking!  $40 for the entire trip.

A tent is not required.  You are welcome to sleep on the bus.  You may rent a tent from us for $80.
A tent is often nice for privacy.

Our coaches are equipped with a camp kitchen.  No need to bring your own cookware or utensils.  Bring a reusable lunch container or bento box to store your packed lunch, along with a reusable water bottle.

Once you’re booked, you’ll receive a detailed packing list with your ticket!

Total Payment Due 60 Days Prior To Adventure 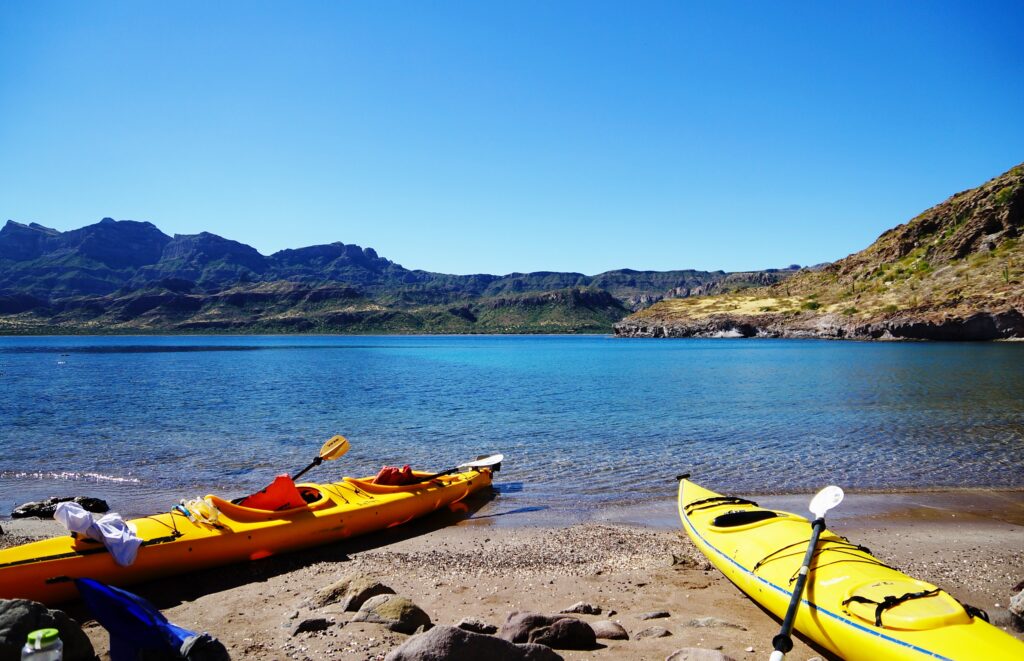 A brilliantly painted pastel sky greets you each day in Baja.  The ambience is charming and easy-going. A few days exploring this desert paradise will transform anyone’s winter blues into sunny smiles!  Have some up-close experiences with the curious marine life and relish in the endless horizons of the Sea of Cortez!  Take some time to relax on the many sandy beaches and get your boots dusty as you rock hop along dry river beds to hidden waterfalls and palm oases! Baja bursts with opportunities to explore by land and sea.